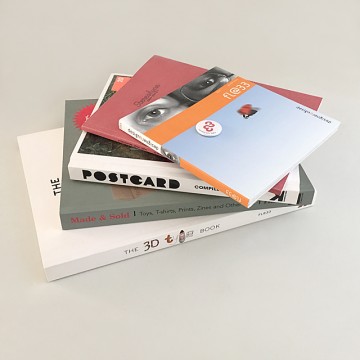 Stereohype 2004–2014
anniversary book
Paperback with flaps
introduction by Gavin Lucas
compiled, written and designed by FL@33
over 1,000 illustrations (incl all button badges released up until September 2014)
72 pages
210mm x 162mm
Published in September 2014
by FL@33 and Stereohype
Printed in an edition of 1,000
on uncoated and glossy stock
Product page.
+
The 3D Type Book
compiled, written and designed by FL@33

About the five books:

Stereohype 2004–2014
The anniversary book and exhibition catalogue Stereohype 2004–2014 was compiled, written and designed by Stereohype-founders Agathe Jacquillat and Tomi Vollauschek at FL@33. Exhibition and book serve as a huge thank you to the hundreds of collaborators, contributors and stockists that have supported Stereohype over the years. It's a great book for graphic design, illustration and button badge lovers – so get your copy now!

As well as pioneering milestones from as far back as the 1940s, this book focuses on recent and brand new typographic projects. 3D type specialist Andrew Byrom explains the context and motivation behind these innovative works in an insightful foreword.

"Eine faszinierende, umfangreiche Sammlung von 3D-Schriften… (…) Eine schöne Inspirationsquelle!" Novum magazine
+
Made & Sold: Toys, T-Shirts, Prints, Zines and Other Stuff
Official blurb: Made & Sold showcases an exciting selection of products created by a new generation of multi-disciplinary practitioners who split their time between self-initiated and commission or client-based projects. These passionate, young and independent design studios, freelancers and commercial artists are in many respects their own clients and design, produce, manufacture and directly sell – often online – to a potentially global customer base. Features over 1000 pictures of over 500 products by over 90 practitioners from around the world, with emerging talents sitting alongside established artists. Separate sections are devoted to 'Books, Magazines and Zines', 'Toys', 'Posters, Prints and Canvases', 'Fonts and Typographic 3D Products', 'Clothing', 'Accessories', 'Miscellaneous' and 'Contributor Profiles'.

Press clippings:
(...) "So, from all that, here are my ten books of 2009: Made & Sold (Laurence King Publishing) – Put together by design activists FL@33, this book looks at how artists, designers and illustrators have started making and selling their own products; mugs, tees, toys and prints. The trend has certainly made my job as a retailer more interesting." (...) Marc Valli, Creative Review

(...) "The true beauty of self-initiated artwork and its different applications is captured here quite brilliantly by the creative team behind FL@33, and its various online guises. (...) The result is a spellbinding showcase of applied artwork, which captures the quirky and collectable nature of the products on display." Computer Arts Project, 130
+
FL@33's Postcard book (English edition)
Postcard — compiled, written and designed by FL@33, Agathe Jacquillat and Tomi Vollauschek.

Postcard is a celebration of recent postcard design, this unique book showcases over 800 miniature works of art, specially created for a postcard-sized canvas: a must-have for avid collectors as well as anyone with a passion for graphic design. Features over 100 artists, illustrators, photographers, designers and collectives from around the world, with new talents sitting alongside established artists.

Press clippings:
(...) "Yay for this gem of a book and the *fantastic* cover!" Tina Roth Eisenberg, Swissmiss blog

(...) "... Postcard, a beautifully crafted tome (compiled and edited by FL@33) aimed at the coffee tables and carefully curated shelves of designers and image makers – and of course those that appreciate such things …" (...) Gavin Lucas, Get Involved Blog
+
Design & Designer 033 – FL@33
Agathe Jacquillat and Tomi Vollauschek at multi-disciplinary design studio FL@33 were commissioned by Paris-based Pyramyd Editions to prepare a book on FL@33 projects. The book was published in May 2005 as part of the highly collectible and affordable Design & Designer series and magically even with edition number 33. The introduction of the book entitled Design & Designer 033 – FL@33 was written by Liz Brown who previously already wrote a FL@33 profile for Grafik magazine 110. The book features commissioned and self-initiated FL@33 projects side by side including previously unpublished work. Signed copies are exclusively available at stereohype.com.

Press clippings:
(...) "..., this is a perfectly formed volume showcasing the intriguing work of London-based Franco-Austrian duo Agathe and Tomi, aka FL@33. Its diminutive size means that the emphasis is on imagery rather than text, so copy is pretty much restricted to the captions and a preface by Liz Brown. It doesn't really matter too much, though, as the work is consistently engaging and presented in a fresh and appealing way. It's a great snapshot of what they've achieved so far and bodes well for FL@33's future." (...). Grafik magazine

35 other products by: Various