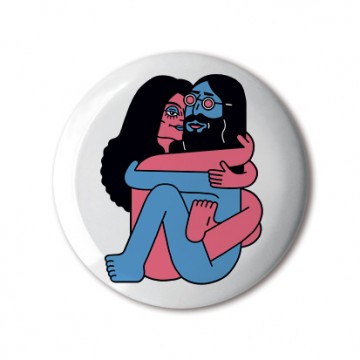 ‘Is there anything that symbolizes peace and love more succinctly than an image of John Lennon and Yoko Ono naked and cuddling? I’m pretty sure there isn’t. So while this is clearly a John and Yoko emoji, it’s also a peace and love emoji.’ — Serge Seidlitz

An English/German hybrid, born in Kenya in 1977, Serge Seidlitz grew up travelling between the UK, Russia and Asia. Serge combines elements of popular culture with these diverse influences to create a body of work which both relates back to an iconic graphic language and also explores innovative and original ideas through maps, information graphics, character design and much more.