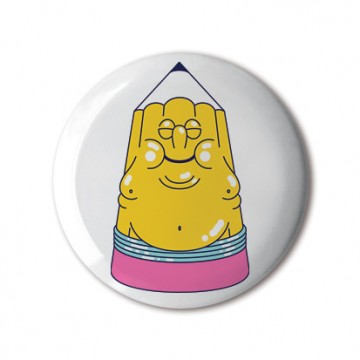 ‘This happy and obviously heavy pencil is for use on those occasions when you want to put a date in the diary for a catch up with a friend.’ — Rob Flowers

Rob Flowers spends most of his time either illustrating stuff influenced by some of his favourite things or searching for junk to add to his growing collection of assorted miscellany. Said favourites include medieval bestiaries, Halloween ephemera, folklore and mythology, Sid and Marty Kroftt, clowns, sideshow and circuses and 80s gross-out toys. Ideally he’d like to live in a land of hamburger patches, milkshake volcanoes and fillet-o-fish lakes. Described as “a distinctive originator on the illustration scene” his work has been described as “bright, playful… a little eccentric” and that “you can spot it a mile away”.

6 other products by: Rob Flowers