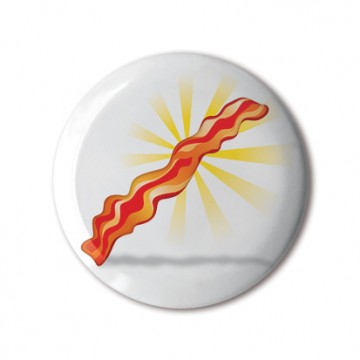 ‘Why do we need a bacon emoji? Because I’ve had to settle for sashimi or a kebab too many times. Because I’ve had to spell out the incredibly long word B-A-C-O-N on a very hungover Saturday morning too many times. Because I’ve had to waste precious time texting the full sentence ‘If the brunch place doesn’t have bacon I’m not going’ too many times. Because bacon is one of my greatest passions in life and in the lives of so many people I love. Because there’s already a fried egg emoji but it’s just sitting there all alone. Cold. Bored. Aching for something to be near it. We don’t need every single fruit found at the grocery store (along with some that have never before been spotted in the produce section ... anywhere) when we’re missing something that is one of the major food groups all on its own. Because they gave us a CD, a DVD, a minidisc AND a floppy disk – all of which are essentially extinct. And don’t even get me started on the unprecedented variety of padlocks and blasting speakers they thought we needed – that would be four of each. Four. And yet only one essential, savoury breakfast food. And only one meat-related emoji I find handy at all: the burger. When was the last time anyone suggested a Renaissance-Fair-status turkey leg for dinner and found that emoji to be a real timesaver? My point here is that the creators of emoji vastly underestimated the significance of bacon in my life and in the lives of so many other young, healthy, non-vegan Americans. And they didn’t realize that it would have been one of the most truly iconic, useful, time-saving, beautifully designed, honoured and cherished characters in the history of hieroglyphics. Amen.’ — Liza Nelson

Los Angeles-based Liza Nelson is an image maker and art director probably best known for her photographic emoji project Emoji IRL. LOL that also features in The Story of Emoji by Gavin Lucas. She is orginally from Oklahoma, USA.