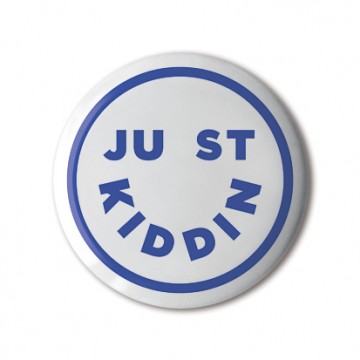 ‘When it comes to expressing yourself via emoji, it can be tricky to express negative emotions. There’s nothing stronger than an angry smiley or a “thumbs down”. But sometimes I do miss expressions of irony, a face-palm or maybe even a middle finger. You have to be careful with those though, because negative emotions might seem a lot more extreme in writing than in person. So, to minimize misunderstandings, I’ve prepared a “just kiddin” emoji. As soon as you’ve gone a little too far (or when you’re afraid that the person you’re conversing with might not get that you’re joking), this one comes in handy.’ — Friso Blankevoort

Friso Blankevoort (a.k.a. Freshco) is an illustrator / designer who lives and works in Amsterdam, The Netherlands. As far as he can remember he has always been drawing. Skateboarding culture has had a significant impact on his artistry, being inspired by the graffiti he saw around him when he first started skateboarding as a teenager in Haarlem and Amsterdam. Freshco studied illustration at the Willem the Kooning Academy in Rotterdam.