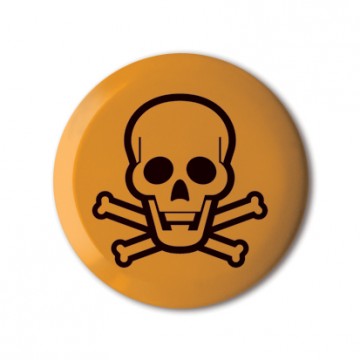 Danger(ous) (De)signs —  Made in United States of the Art (USOTA). "The four-piece work is a redesign of classic danger signs you find on paint cans, chemicals, etc. The four signs were reworked in high-quality USOTA-vector style to become a cool way to express the (bad) mood you are in, when worn as a badge."

Freelance graphic designer Carsten Raffel aka Cargo was born in 1973. He lives and works in Hamburg, Germany. He co-founded the design collective United States Of The Arts (USOTA) together with Jens Uwe Meyer aka Jum. Both studied Visual Communication in Germany, at Hildesheim and Bielefeld respectively. Carsten is best known for his fresh logo and corporate designs, illustrations, character- and font-creations and their unique pictographic icon-style.

Created by: Carsten Raffel / USOTA (United States of the Arts)

11 other products by: Carsten Raffel