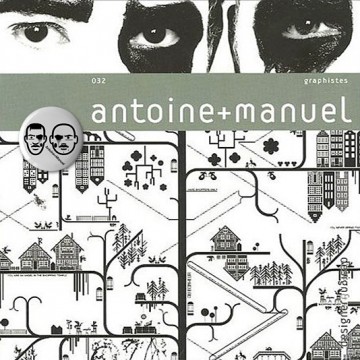 Comes with a Portraits button badge by Antoine+Manuel from B.I.O. Series 4.

Associates since 1993, graphic designers Antoine and Manuel work mainly in the spheres of culture and fashion. Their graphic interventions cover a broad spectrum – visual identities, editorial design, furniture design, exhibitions and installations. When creating the visual identity for the Lambert Collection in Avignon, they wanted it to be warmer and more intimate than those of other institutions. They also illustrate the collections of Christian Lacroix (catalogues, invitations…) as well as producing season posters for the Centre Chorégraphique Nationalde Tours and the Comédie de Clermont theatre; their work for the latter institution is typified by gouache illustrations and typography. For the CCNT they have elected to use a supple and structured style based on ramificationsand arborescences as the recurring motif for each season. They graphic-design exhibition catalogues for the Galerie Yvon Lambert (those for artists Koo Jeong-A and Bertrand Lavier, for instance), and have also carried out editorial projects for the Festival de Cahors, the Pompidou Centre and the Ecole Nationale des Beaux Arts in Paris. Antoine and Manuel have developed a refined, luxurious graphic language whose delicate geometry decorates the murals produced in the Galeries Lafayette Maison homewares store in Paris. Their work in the field of furniture design embraces this graphic vocabulary, adding a fresh dimension to their world.

Their first monograph design&designer 032 – Antoine+Manuel was in 2005 as the book series by French Pyramyd Editions.