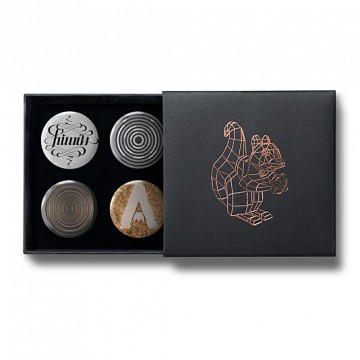 Dutch (typo)graphic design studio Autobahn (NL, 2006) is named after the fictitious band in the movie The Big Lebowski. During art academy Maarten Dullemeijer (1982) and Rob Stolte (1981) started a band with several others, but soon decided that they’d better stick to designing. The project that had the most influence on their design thinking after they graduated from the School of the Arts Utrecht (HKU) in 2005 was Freshfonts. Autobahn was invited to attend to a Pecha Kucha night. They decided not to give a portfolio presentation but to use the opportunity to start a new project. The idea was to use gravity to generate fonts that would be less and less readable. Result was a series of experimental type made with toothpaste, tomato ketchup and hair gel. The project turned into a bigger success than was foreseen but most important: their slumbering love for typography was awakened and fueled with a new mentality. Ever since, Autobahn takes the opportunity to expand to their new experimental mentality for typography in every assignment. Craft plays an important part of their daily design routine while they experiment with materials, production methods and re-inventing old techniques. Combine this exploration with a clear concept and big gestures, and it results in a typical Autobahn design.

9 other products by: Autobahn