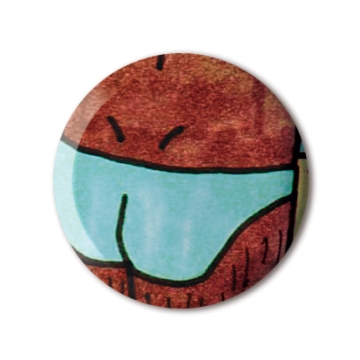 This artwork is by one of twelve winners of our 17th annual Button Badge Design Competition – selected from 777 accepted entries submitted by 216 individuals, studios and collectives.

Stefan Alexander is a comic artist and zine maker based in West London who is in the autistic spectrum. He is a creator of his web comic The Fluffs and creates small scale work such as zines into mini stories. His practice mainly focuses on water, swimming and fantasy through his zines and other artwork.

He is very hyperprolific when creating mini zine stories he could think of that pops out of his mind mainly creating them by hand. Also he sold his zines at related art and zine fairs such as: DIY Space For London, Hyper Japan Festival. He especially had some of his work displayed in Osaka, based in Japan. And now recently exhibited at the Open Art Space Chelsea Theatre Hub based in Kensington and Chelsea borough.

4 other products by: Stefan Alexander