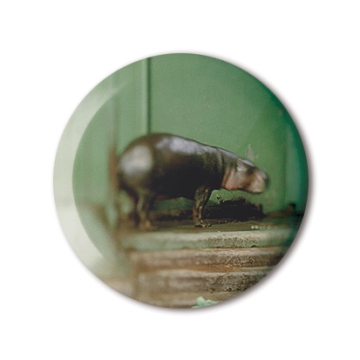 ‘The “To Cage” project evolved slowly and was driven by many influences. I had worked intensely in the studio for a period, building and shooting ambiguous spaces  populated with the merest hint of occupation. During a chance visit to a zoo I realised these spaces were already built for me! The pictures were informed by the amateur aesthetic of haphazard family “snaps” from zoo trips in the 1970s. Over time and I began to see the zoo in darker terms, as a theatrical stage where animals are placed, as if they were trophies. I wanted to convey this intense voyeuristic feeling.’ — Dominic Davies

Dominic's v23-designed book “To Cage” – a study of the European zoo environments – was published by Kruse Verlag.

Dominic Davies (b.1966 lives in UK ) moves between studio practice and observational photography, the nuisances and challenges of both informing the other. Experimental and collaborative in approach his images and methods were utilized in a long working relationship with Vaughan Oliver at 4AD and V23. He brings a precise and crafted vision to all his projects. He is driven by the fascination with exploring and realizing his ideas photographically. His work has been commissioned across the fields of design, music, publishing, museums and advertising. He has exhibited in Europe, USA and Japan and his book ‘To Cage’ a study of the European zoo environments was published by Kruse Verlag.

8 other products by: Dominic Davies