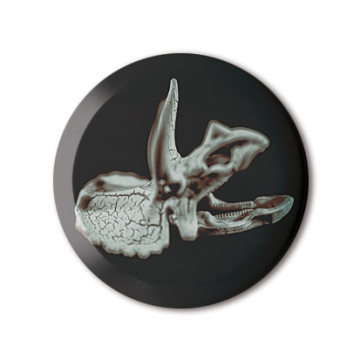 Beneath The Eyrie: Dino Skull

Pixies: Beneath the Eyrie

Simon's Beneath the Eyrie series was also partially used as sleeve artwork from the Pixies album “Beneath The Eyrie" (2019). Originally formed in 1986, in Boston, Massachusetts – by Black Francis (vocals, rhythm guitar), Joey Santiago (lead guitar), Kim Deal (bass, backing vocals), and David Lovering (drums) – to this day Pixies remain one of the pioneers and the most influential among the Alternative Rock music luminaries to ever emerge in the 1990s – the so-called golden decade of the genre. 'Beneath the Eyrie is unarguably the best output of Pixies since their resurgence'. (Cryptic Rock, September 9th 2019.)

Simon Larbalestier graduated with a Master of Art degree from the Royal College of Art, London in 1987 and from his degree show he began his collaboration with Vaughan Oliver / 4AD, and he continued to do so for over 25 years. The most critically acclaimed is the work they designed for the Pixies (who are credited with being a major influence on the alternative rock boom of the 1990s).

Simon's photography has been a key factor in the success of their packaging that has resulted in two separate Grammy nominations. In 1989 he was profiled on BBC2's influential British television arts magazine “The Late Show”. His work has been exhibited and published internationally since 1985 and has received international critical acclaim. He set up his first website in 1998 offering online print sales and image licensing. This online presence now includes a blog and many other web links to his extensive image archive. In 2009 Oliver and Simon collaborated again on a limited edition box set re-issue of Pixies recordings, Minotaur, which included a 72-page book of new photography and graphics. In April 2010, Simon joined Snap Galleries, located in Piccadilly, London, celebrating with a major Pixies Retrospective 1986-2009. This exhibition brought together, for the first time anywhere in the world, two distinct yet complementary bodies of work by Simon: historic studio based photographs that appeared on the Pixies record sleeves from the 1980s and 90ʼs, and new images created in Bangkok in 2008 specifically for the lavish Pixiesʼ box set project, Minotaur.

He has been based in Bangkok, Thailand since 2001 developing his own personal photographic research and has built up a comprehensive and extensive South East Asian and Asian image library. This is now represented by the London photographic agency, Millennium Images, and the International agency, Alamy.

14 other products by: Simon Larbalestier