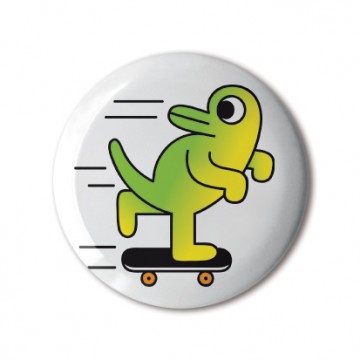 ‘For some crazy reason there isn’t a skateboard emoji in the standard set, and I wanted to right that particular wrong. So I created a skateboarding dinosaur that could be used by all of us skaters to succinctly communicate that we’re busy skating!’ — Matthew Bromley

Matthew Bromley is a London-based illustrator and skateboarder. He describes his style as ‘non-linear’, and says that old children’s books are one of his main influences. Most of his works consists of a limited palette of two or three colours per design and are populated by simple, fun characters.