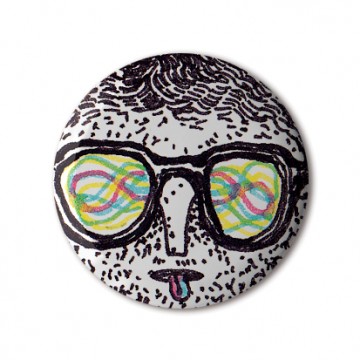 This artwork is by one of twelve winners of our tenth annual button badge design competition – selected from 593 accepted entries submitted by 156 individuals. Exceptionally this competition called for hand-drawn doodles only – all created in the gallery space of the anniversary exhibition Stereohype 2004–2014.

Artist
Modesta Kalkyte is a graphic designer from Lithuania where she graduated in 2014 from Vilnius Academy of Arts. She also studied in Austria where she exhibited her work. Following her studies she participated in the London Design Festival together with other designers forming the collaborative exhibition 'Young Lithuanian Designer' that resulted in a pop-up gallery in the Lithuania Embassy House. Modesta exhibited her final year project 'Structurolony' there. Now based in Lithuania she is working as a graphic designer in 'music and art factory'. She also enjoys to draw illustrations, screen-printing and to paint murals in public spaces.