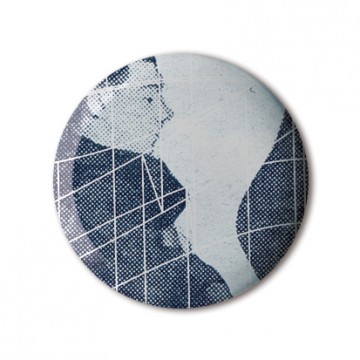 Vaughan Oliver was an art director, graphic designer and consultant with over three decades of experience of working in all areas of graphic design. Specialising in work for the music industry, Vaughan’s unique approach attracted clients from a broader field including fashion, publishing, packaging, theatre, film and television, architecture, advertising, retail, food, dance, erotica, football and education. He enjoyed numerous international “solo” shows including Paris, Tokyo, Osaka, Los Angeles and Athens. Vaughan Oliver: visceral pleasures, a design monograph by Rick Poynor was published in November, 2000. Vaughan was a Visiting Professor at the University of the Creative Arts (UCA), Surrey and at The University of Greenwich. In 2013 Vaughan was elected into the AGI, Alliance Graphique International: an elite group of graphic designers with approximately 400 members worldwide.

Stereohype addition — our FL@33 / Stereohype collaborations:
We specially commissioned a poster and badge by Vaughan Oliver as part of Stereohype's 10th Anniversary 10x10 Poster / Badge Series. They are available here and are also featured in the book Stereohype 2004–2014. Vaughan also contributed a postcard design to FL@33's book Postcard (Laurence King, 2008) that is available here, too. His card was produced and comes with the book he is also featured in with numerous other v23 / 4AD postcards – including work for The Pixies, Breeders and Dead Can Dance.

A personal note, 29 December 2019:
Such devastating news today. Vaughan Oliver has died. He was a larger than life person, my design hero, an immense inspiration for me and a whole generation of graphic designers. Vaughan was a gentle, humble and generous man I had the pleasure to meet a few times over the years. We even hugged once. I had the honour to feature his beautiful work in some of my design studio’s books and he collaborated with my graphic art label by contributing button badge designs and a commissioned poster. Vaughan’s work is one of the reason’s why I fell in love with many of my now favourite bands, why I became a graphic designer and why I eventually moved to the UK where I subsequently met my wife and mother of my children. My thoughts are with his family now. My sincere condolences to his family and loved ones. I very briefly met his son Callum, his wife Lee a few times and I saw a video recording of the birth of his son Beckett during a Vaughan Oliver lecture many moons ago in the 90s. I am deeply shocked about Vaughan's passing. He left us far too early. One of a kind. One of the very greats. He didn’t want to accept his first royalties for his Down To Ten Men poster and asked me to buy something nice for my newborn daughter at the time. What a lovely Mensch. I am truly heartbroken. Shine on! RIP ♥

11 other products by: Vaughan Oliver