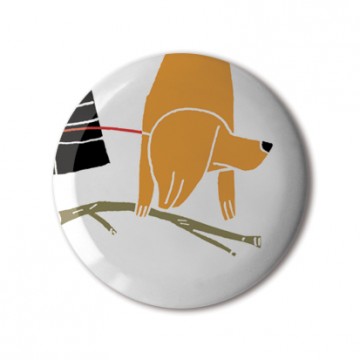 These four images are details of one illustration on enjoying picnics outside in autumn. They can be worn together or individually.

Born in New Jersey, Whitney completed her BFA in Photography before moving on to use her drawing and design skills to become an award-winning illustrator. Her work has been published in all major US newspapers and most major magazines. She has also illustrated two books and many more book jackets. In 1998, she created the central image for the US Postal Service Breast Cancer Research stamp, the first semi-postal issue in the US. It has raised over $70 million for research to date. In 2000, she was recruited to be Chair of Illustration at the Maryland Institute College of Art [MICA] after many years teaching illustration and design part-time. There she developed the program into an innovative multi-disciplinary program and the largest in the College. She also served as President of ICON5, the national illustration conference held in NY. After ten years teaching undergraduate, she developed an MFA program in Illustration Practice at MICA to examine the future of illustration. She is an advocate for learning more about the history of illustration, developing authorship and being an entrepreneur. Her eclectic imagery is influenced by graphic arts traditions from around the world, and she is deeply interested in decorative arts and objects and how they reflect culture. They occasionally show up in her work. Currently Whitney lives and works in Baltimore.

8 other products by: Whitney Sherman