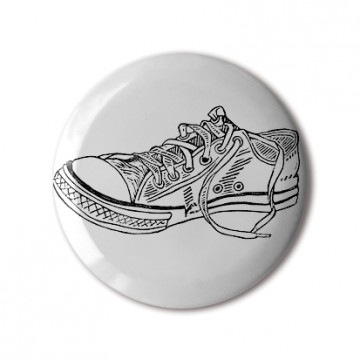 Becca’s artwork is one of her worn, old, white Converse Low Rise. As she explains, "I've owned a pair since 2003; they've seen me round the world and this one was from my third pair. I recently had to retire them after the heels became more hole than fabric, and only realised how brown they'd become when I saw them next to their shiny new replacements. They looked like they'd been buried in the garden and dug up by a ravenous hound. I still wear them on the allotment when it's too warm for wellies."

Becca Thorne is an illustrator and printmaker based near Nottingham, UK. She grew up in the magical Forest of Dean and has an MA in illustration from Falmouth College of Arts. As a bit of a country bumpkin she gets out of town as often as possible on camping, diving and walking trips, where she spends lots of time bumbling about beautiful coasts and windy hilltops, watching wildlife, eating pasties and drinking fine local ales, all the while soaking up inspiration for personal work. Becca is a great admirer of Medieval artwork and wonderful 20th century printmakers such as Sybil Andrews and Lill Tschudi. Becca works from home in the Land of Spare Oom and uses a teaspoon in place of a printing press. She’s worked for a wide variety of clients, with repeat offenders including BBC History Magazine, The Folio Society, National Trust Books, phd and YSC.

5 other products by: Becca Thorne