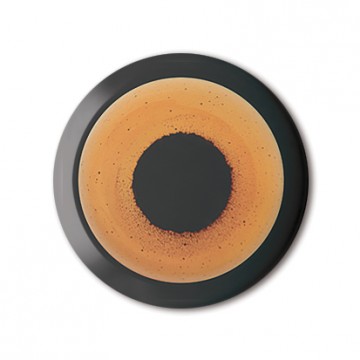 Taxidermy Bird Eyes — The imagery for this Intercity badge series has been taken from a project the studio did in early 2012 for Brighton-based record label Concrete Plastic. With a brief that included a reference to the 1982 science fiction film Blade Runner, Intercity came up with the idea of photographing the plastic bird eyes used in taxidermy – a direct reference to the scene in the film where an owl’s eyes flicker with a red tint, indicating that it is artificial. The orange taxidermy eye seen here (taken from the Blixaboy Intro to Futro EP cover artwork) is that of a Snowy Owl, and the yellow taxidermy eye (taken from the Blixaboy Futro City album cover artwork) is that of a Sparrowhawk.

Founded by former Creative Review art director Nathan Gale, Intercity is a graphic design studio with a network of collaborators from the worlds of art, design, photography, illustration, digital media and beyond. Intercity applies its highly creative and considered approach across a range of areas including editorial, music, branding, fashion and advertising. As well as producing high-end graphic design, the studio also specialises in live art projects, exhibition curation and event organisation. Nathan also runs his Art & Sole blog – named after his book on sneakers of the same name.

10 other products by: Nathan Gale