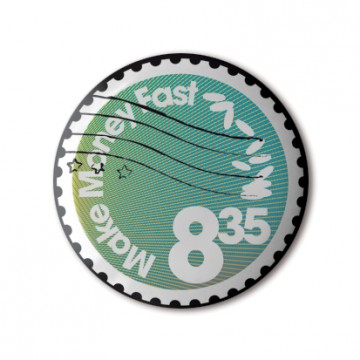 The Junk Stamp Badge Series is a comment on the development of the way words are used to make our lives just a little harder by filling up our mailboxes with spam en masse. Why not go for an old-fashioned letter hand-drawn and written on thick cardboard. Yeah!

Copenhagen-based designer Mathies Møller Højmose has an educational background from the department of Architecture and Design at Aalborg University, Denmark, primarily focusing on digital design and installation architecture. In 2005 Mathies set up Visual Flavour, a small studio working with photography, visual identity, print, web and other aspects of graphic design. Besides his activities with Visual Flavour Mathies also ran a web shop called Formlös up until 2012. Mathies co-founded design studio Trace in 2012.

7 other products by: Visual Flavour