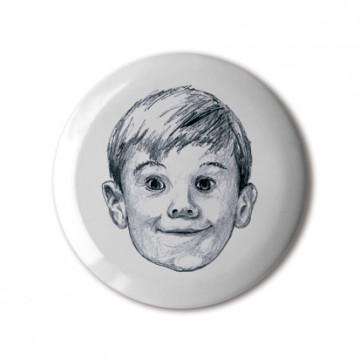 Darren is a co-founder and Design Director of the UK based design studio, Six. In this and previous roles, he has worked closely with clients such as Kirschner, Ben Sherman, Puma, Nike, Boxfresh, Loake, Lee Cooper, Portsmouth FC, Land Securities and Clarks Originals. He has built a reputation for producing design with intelligence, integrity and craft; His experience extends across multiple industries, for a roster of both national and international clients. Darren has also managed Occupy and all its associated activities since its launch in 2003; curating full scale exhibitions and installations, printed publications and limited edition products.

A little addition by Stereohype: Darren Firth was the button badge master himself – as we secretly called him when nobody watched – simply because he and his now defunct Wearitwithpride button badge project were one of the first to generate a global new wave of popularity of the humble button badge in this very new century. He is also co-editor and curator of the travelling exhibition and book Two Faced – The Changing Face of Portraiture which was published by IdN in January 2007.

9 other products by: Darren Firth