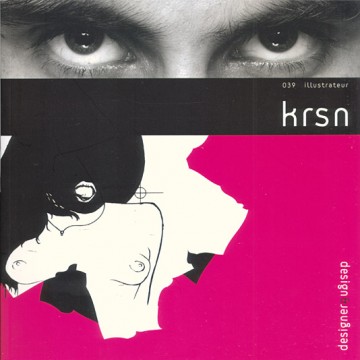 Design & Designer 039 – KRSN, official blurb: An art director and illustrator, KRSN cut his teeth on the graffiti scene in the early 1990s. Without ever forgoing his aerosol sprays and Posca paint pens, he has developed a personal style shot through with dark irony.

Taking a novelistic approach, he combines illustration, graffiti and painting, drawing inspiration from everyday life to create characters made of fine, pared-down lines. KRSN operates at the intersection of graffiti, graphic art and illustration. Using a variety of supports – stickers, paper, walls, card, fabric – he compels attention with a personal style that is both disturbing and mysterious. Mutilated and disjointed characters begin their life at the ephemeral tip of his ballpoint, a favourite tool. Besides his artistic and other self-initiated projects, which take up most of his time, he collaborates with WAD and Clark magazines, and does illustrations for covers of discs released by the Institubes label.