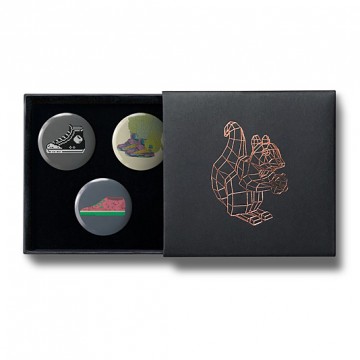 This elegant matchbox-style gift box contains three designs from Stereohype's growing button badge collection – now available for the first time in this superb packaging solution. A rose-gold foil-blocked Stereohype mascot squirrel was hand-printed in the UK at the top of the gift box (outside dimensions: 75 x 72 x 16mm). Inside the beautiful matt black cardboard gift box is a black flock pad and badges are directly pinned into it. All Stereohype button badges available at stereohype.com are classic high quality one inch (25mm) metal back badges with so-called D-pin (although it looks more like an 'e'). Tiny stickers at the back of each button badge mention the artist, release date, series number, etc. Badges are manufactured with love and care in the United Kingdom.