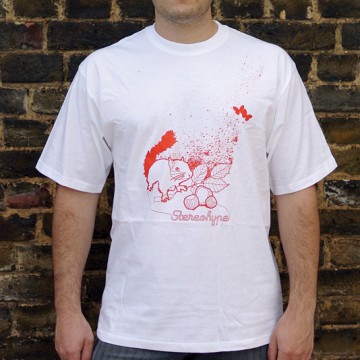 Agathe Jacquillat and Tomi Vollauschek from London-based design studio FL@33 created this Stereohype Squirrel T-shirt as part of the evolving visual identity created for stereohype.com. This second squirrel motif has been reprinted once and while the slim-fit version is now sold out – a few unisex T-shirts are currently still available via our Back Catalogue sale.

It already appeared in various shapes and forms on mediums including T-shirts and short sleeve shirts, postcards and swing tags, exhibition sculptures, book and magazine covers and animations. We are of course talking about the Stereohype squirrel. Initially thought to be a cute little metaphor representing our customers and Stereohype staff alike – relentless hunters and gatherers of button badges, T-shirts and other graphic art gems – it has become much more over the last decade: a mascot for the ever-evolving project that is Stereohype. Agathe Jacquillat and Tomi Vollauschek from London-based design studio FL@33 created these numerous Stereohype Squirrels as part of the playful and versatile visual identity created for stereohype.com.