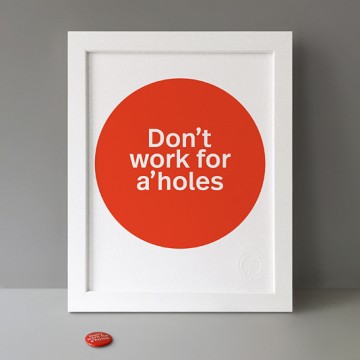 In 2011 he received the German National Design Award for Lifetime Achievement and the TDC Medal as well as a Lifetime Award from the German Art Directors Club.
He was managing partner and creative director of Edenspiekermann with offices in Berlin, Amsterdam,  San Francisco and Los Angeles until June 2014 when he moved from that position to the supervisory board. He now runs p98a, an experimental letterpress workshop in Berlin. Erik splits his time between Berlin and San Francisco and London, where his son Dylan lives.
A book about his life and work Hello I am Erik was published by Gestalten Verlag in 2014.

Button Badge Motif Print Series features selected designs from Stereohype's ever-growing one inch (25mm) button badge collection. The circular artworks are enlarged to seven inch (178mm) and printed on a beautifully textured paper (portrait, 8" x 10" / 203mm x 254mm). The print series already includes over 300 artworks and will further grow to be as rich and versatile as Stereohype's widely-acclaimed button badge collection. The badge collection already features over 1,500 artworks by over 500 established and emerging illustrators, graphic designers, typographers, photographers and artists from around the world. Some of Stereohype's button badge motifs are clearly better suited to be enlarged and featured on a print than others, but many hundreds of designs will make amazing print motifs. More prints are regularly added to this only recently launched  Stereohype range. Each print comes with the according button badge. We also have an optional custom frame for Button Badge Motif Prints (as seen in previews). This wooden high quality custom frame is built with a matt, white 'small alpha' frame made by our local London, Clerkenwell framer. Frame is made on demand.