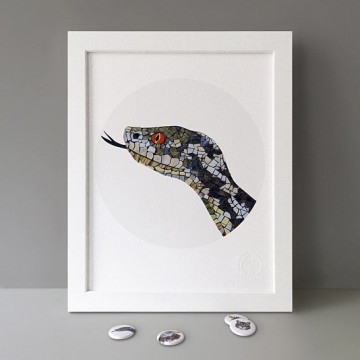 This artwork is from Stereohype's B.I.O. (By Invitation Only) Button Badge Series 11. Painting with paper – Britsh wildlife. The images she created for these Stereohype badges were made with a collage technique that she has only recently been developing and would describe as ‘painting with paper’ as she approaches building up the image with colour much in the same way as creating a painting. She began using this technique whilst working at London Zoo as she had to create animals which were true to life. Holly uses magazines, craft papers and anything else she has collected for her collage box. With a love of wildlife, Holly is keen on raising awareness of the environment in the hope that people will wish to protect it. Previously for Stereohype, Holly designed badges which depicted endangered animals which were inspired by her time at the Zoo. This year, she decided to look closer to home and selected British species which are in need of preservation – The Red Kite is a success story as she can now see them swooping and screeching in the sky. She thinks she might have seen an Adder once, but has definitely never seen a Scottish Wildcat and being a ‘cat person’ this is something she would love to do. She has often seen Bumblebees and thinks it is amazing that they puzzled physicists for years as they apparently defied the laws of aerodynamics to be able to fly. It turns out (in simple terms) that they just have to flap their wings really, really, really fast.

Button Badge Motif Print Series features selected designs from Stereohype's ever-growing one inch (25mm) button badge collection. The circular artworks are enlarged to seven inch (178mm) and printed on a beautifully textured paper (portrait, 8" x 10" / 203mm x 254mm). The print series already includes over 300 artworks and will further grow to be as rich and versatile as Stereohype's widely-acclaimed button badge collection. The badge collection already features over 1,500 artworks by over 500 established and emerging illustrators, graphic designers, typographers, photographers and artists from around the world. Some of Stereohype's button badge motifs are clearly better suited to be enlarged and featured on a print than others, but many hundreds of designs will make amazing print motifs. More prints are regularly added to this only recently launched  Stereohype range. Each print comes with the according button badge. We also have an optional custom frame for Button Badge Motif Prints (as seen in previews). This wooden high quality custom frame is built with a matt, white 'small alpha' frame made by our local London, Clerkenwell framer. Frame is made on demand.